Advertisers - Why you care about performance (speed)

One thing that has always amazed me while working on web performance is the need to push advertisers to care about the performance (speed) of their ads.  The hard part is that the way things are structured in advertising, the ones paying the money aren't even usually aware that it's something they should care about and it's not something they hold the agencies (that actually create the ads) or the publishers (that serve the ads) accountable for.

At some level, ads are largely accounted for at the impression level.  The publishers track the number of impressions and the advertiser pays based on the number of impressions that were served.  This is a bit simplistic because there are all sorts of variations as well as click or action-based arrangements but fundamentally they are going to be driven by the same pressures.  An interesting fact that isn't thrown around too much is that an impression is counted at the time a decision is made to serve your ad, not when the user actually sees it.

Let's think about that for a minute...What that means is you are paying for every time the ad publishing system starts to serve your ad but there is no guarantee that the ad itself ever made it to the user.  Let's say your agency and publisher ended up creating an ad creative that takes 12 seconds to load it's initial payload (yes, this is a real case and while most aren't this extreme they are usually pretty bad).  That means the user has 12 seconds to interact with the page (and even leave) before the ad you just paid for even shows up.  That is insane!

Getting the delivery time of the ads (at least the initial payload until something is visible) to be as fast as possible needs to be a requirement in all contracts, otherwise you are just throwing money away.  The publishers don't have any incentive to optimize the delivery since they get paid regardless.  Make sure the performance is also measured based on the users you are targeting the ads to (targeting mobile? try on an actual carrier on an actual mobile device).  Don't accept results from performance tests done from a data center on a high-bandwidth internet connection (or even worse, from someone at their desk) - you need to measure in the real world on real user connections because things can be exponentially slower without you realizing it.
Posted by Patrick Meenan at 2:58 PM 4 comments:

This is what open source is all about!

Today we are taking the first step in combining the optimization checks done by Page Speed and WebPagetest by making the Page Speed results available from within WebPagetest (and from an IE browser for the first time).  Huge thanks go out to the Page Speed team and Bryan McQuade in particular who did the bulk of the work getting it integrated into the Pagetest browser plugin (as well as Steve Souders for encouraging us to collaborate).


What You Will See
In your test results you will now be getting your Page Speed score along with the normal optimization checks that are done by WebPagetest:

Clicking on the link will take you to the details from Page Speed about the various checks and what needs to be fixed: 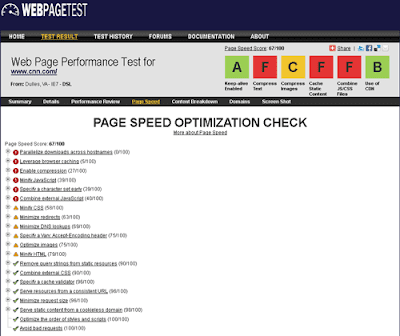 What's next?
As I mentioned, this is just the first step.  The long-term plans are to take the best of both tools, enhance the Page Speed checks and standardize on Page Speed for optimization checking.  You'll probably see the individual rules start to migrate slowly (with things like gzip and caching being no-brainers since the logic is essentially identical between the two tools) so it should be pretty seamless from the end-user perspective.  You will also see the Page Speed checks enhanced to include the DOM-based checks that you're used to seeing in the Firefox plugin.
Posted by Patrick Meenan at 12:48 PM 2 comments: